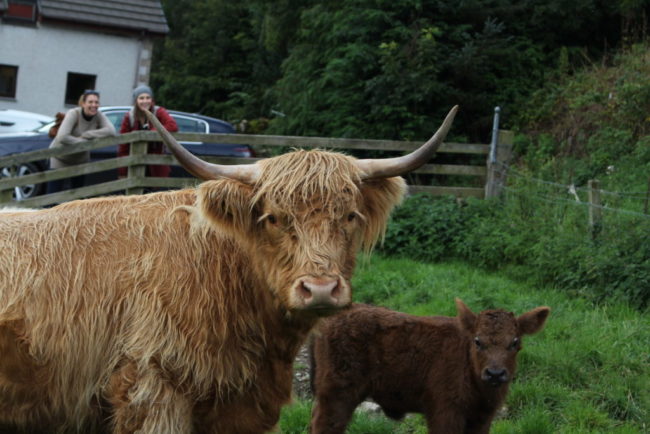 And slowly, but surely, we are making our way back South. Back home.

We were booked on the early ferry back to the Scottish Mainland. Driving to St. Margeret’s Hope, I couldn’t help quietly giggling at some of the things we’ve spotted along the way throughout Scotland. Like the seagulls. Every afternoon, or early evening, when the sun is getting ready to set, they all settle on some pristine green pasture. And they all face West. The sheep, on the other hand, seem to not want anything to do with what the birds are looking at, and face East rather. And in every pasture of sheep you get, there is always one sheep that have ears upright and acting super alert. All the other sheep would be grazing away, but this one sheep appears to almost be on some special mood enhancing substance, causing him to be ultra-hyper. And the cows seem to have two positions. Head down, grazing, or heads up, chewing away, and looking either bored, or quite fed-up of being rained upon constantly.

It would have been silly not to at least see what John O’ Groats was all about. Which, sadly, is not much, other than a few houses, and some touristy shops and cafe’s. It does claim to be the Northern-most point of Scotland’s Mainland. (Some people disagree with this statement). But Duncansby Head, a few minutes’ drive from John O’Groats, is well worth visiting. From the lighthouse, you can take a short walk over a small hill to see the stunning cliffs.

We knew that our drive would be a rather long one today. At least the road was good, and in most parts, the views were stunning. We’ve come to expect nothing less of both Scotland and Ireland. For a large part of our journey, we traveled along the shores of Loch Ness. We certainly don’t subscribe to the hype around the Loch Ness monster, and did not actually care to even go anywhere near Loch Ness. We both had to admit that we were pleased that our route took as alongside this massive Loch. With a length of around 36km, it most definitely provides exquisite views. In fact, today, we probably saw some of the most beautiful lake scenes ever.

In the end, we managed to get to Fort William in good time. It’s another lakeside town, clearly benefiting mostly from the tourist industry, but it’s a convenient stop on our way to the Isle of Mull.