“You’re in Paris” . I remember those words so well. It was my first time in Paris. My first time abroad even. And a very grumpy (he was French, afterall!) busdriver stopped in the middle of some narrow street in Paris, and sent us off with those words.

And so, after the usual uncomfortable longhaul, we arrived in Frankfurt, with, what we thought, plenty of time to shower before we set off to Paris. Uhm….. So for the record – it takes 20 minutes from the time you touch down, to the time you eventually come to a halt. Then it takes a further 45 minutes to walk, at a fair pace, I might add, from your arrival gate to your next departure gate. Time to spare? None. So much for hoping to arrive in Paris all refreshed and ready to go.

We managed to find our hotel quite easily, and even though we knew that we were too early to check in, we hoped to at least use the showers. This we were able to do. Contortionistically! The shower was so small, that even that very long word that I just made up, would have no hope of fitting in it! But hey, we were now refreshed and ready to go.

People say that Paris is the city of love. I see it as the city of emotions. Extreme emotions. Miserable French people are really extremely miserable. Those in love really should rather get a room… It is a beautiful city, with beautiful buildings, a beautiful river, beautiful decorations for the festive season, beautiful shops, even some very beautiful people. Yet, it somehow lacks the soulful character that a city like Rome has. People in Paris just somehow look like they are there because that is what is required for their personality. 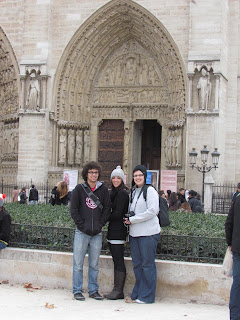 We did as much as we could do in one day. Notre Dame, a very impressive cathedral, Arc de Triomphe, Champs Elysees, Eiffel Tower, although we chose not to go up into the tower, seeing that it was too misty to be able to see anything anyway. And the Louvre. We have had mixed advice as to whether we should go see the Mona Lisa, but It was the one thing Frances really did want to see. Tertius’ excitement at the prospect of seeing the famous Mona Lisa surprised us all, until he actually saw it, though. He somehow exected a lot more than “just a painting”. Men… Nicole was fascinated by the eyes, and made sure that we all walked the width of the room, watching at how her eyes follow us. Frances ended up preferring the Venus de Milo. It really is worth going to see all the exquisite artwork. 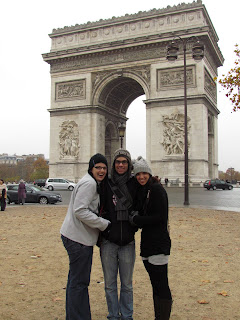 We ended the day off at the Christmas market at the bottom end of the Champs Elysees. Beautifully lit white stalls with fascinating items varying from chocolate covered apples, to fur legwarmers. 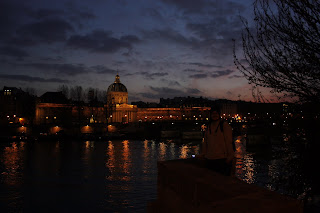 I think it is sinking in slowly now. Our trip is a reality. I am loving the experience!

Frances:
High – Lighting a candle for loved ones in the Notre Dame
Low – size of the shower at the hotel was just ego-busting

Nicole:
High – being able to take a family photo in front of the Eiffel Tower with the camera balancing oddly on a camera bag.
Low – the rude and impolite french and oriental tourists 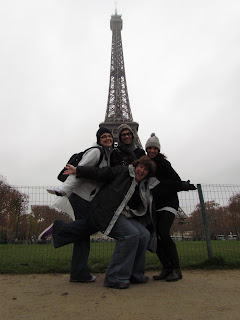 Tertius:
High – Seeing the eiffel tower
Low – the anticlimax seeing the Mona Lisa – this coming from a petrolhead, it is to be expected that a painting might not necessarily impress that easily.

Wesme:
High – seeing how the reality slowly started clicking in.
Low – Paris seems to have no garbage bins! We searched forever to find somewhere to dispose of some take-away coffee cups, feeling too guilty to just dump it like everyone else seem to do. 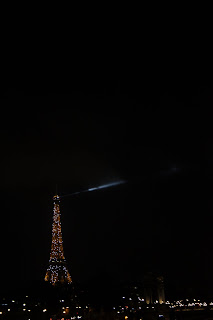